Before we even start, I am one of those people that has watched this film far too many times, and in the 80’s could recite every word without the aid of the film itself. Was I obsessed ? o yeh twenty times over!

The film itself has been talked about 100’s of times, and I am doing this article because Warren at ‘we are the mods‘ did a recent show about it, and to be a little light hearted just before Christmas 2012.

So for first time in over 10 years I watched the film. As I began to watch one thing dawned on me! The film is really dark, not in the subject matter, but that most of it is shot at night. Also the print that has been used for the DVD is not the sharpest. Eddie Piller has mentioned that there are very few sharp prints of the film. Meaning that even if you can see the feet, the quality lets down the tell tale signs of the shoes.

The opening sequence with Jimmy going to what we are led to believe is the Goldhawk Club, appears to be wearing Desert Boots, and these boots seem to stay on his feet for most of the movie.

Sting’s grey or gray shoes I think nearly look the part. The buckle is cool, but I think the film’s designer was actually trying for a smarter loafer, in a flash colour to match the suit he wears. Sting’s suit does look that little more flash as you would expect as he is meant to be the ‘Ace Face’, but personally the shoes need to be better!

So what other shoes can we see?, well not a lot to be honest. 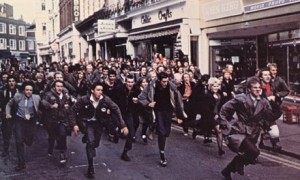 As I watched I thought there would be loads in the fight sequences. There are lots to be seen but no real what I call out and out mod shoes.

In the opening Brighton sequence the camera pans along the scooters, lots of cool scooters and loads of people. In the crowd you can see the Northern Scooter clubs that took

part in the filming. I maybe wrong but i believe that they Olympics Scooter club and also the people that run Armando scooters in the 80’s were in the film, but i am not 100% on this.

The style of the Northern Scooter Mods I can see, is Parka, Jeans and on the feet, Doc Martens and Adidas Trainers. Certainly there have been pictures in “Scootering” of the clubs involved in the film, the makers tried to disguise the Lambretta Gp orientated look to make them look like LI’s etc.The producers must have also been dishing out the hats, how many trilbys! But why not the feet as well?

There is one guy in the riot sequence in a Black Harrington, and he has Cherry Red DM’s on. Another thing you do see a lot of is ‘Red Socks’. There is a guy coming out of the water, he is standing next to Nasty Nick from Eastenders. The amount of sock on show could seriously take an eye out!

I must mention a continuity bit here. For us UK people Nasty Nick can be seen wearing a light blue Polo shirt for the beach fight, but once he is in the lanes running around he has magically found his Parka.

I have read some other blogs saying the style of the clothes in the film is a little lacking in ‘Style‘. I wonder if the mods saying this have pondered whether the reason we think of the 60’s MODS being so much smarter, is because we have only seen pictures of MODS dressed up for the weekend. Meaning in the going out parts of the film, such as the Brighton sequences, Jimmy, Spider, Chalky etc are all wearing suits. But we also see the cast midweek and at work. And with the best respect even the toppest MOD dresses down sometimes. In the Documentary “British Style Genius” a MOD from that time suggest that the original mods had jobs that allowed for wearing of decent clothes. But I always think of Jimmy is being ‘Run of the Mill Mod‘ not a top face.

Anyway this is meant to be about the shoes !

Steph for most of the film lives in little white heeled shoes. How she runs around in heels even little ones is beyond me. She wears these in nearly every scene apart from one. When she arrives at Brighton on her feet are smart pair of suede loafers!The rest of the film the women seem to be in one inch high heels, and flats worn with Ski Pants.

The Desert Boots that the male cast live in, don’t look that good to me either. They seem to be the heavier boot style, with brass eyelets. I have had some of these boots myself and they did last ages, but they are not overly smart.

Dave does seem to have smarter Clarks looking ones in the Brighton bits. Chalky and Jimmy though, let the side down.

Another technical point is that because Jimmy is the central character we dont see the whole of him much in the film. When Jimmy is in shot he is up close,for obvious reasons but the director is trying to help us see what he is thinking. Towards the end of the film as Jimmy is starting to reflect we see more of him.

Now I am saving the best for last.

We see Jimmy in a decent Boating Blazer early on in the film, and some of his outfits are cool, but on his feet are a pair of loafers.

On the right here is a still from the filming where the shoes can be clearly seen. They look good to me and no doubt influenced lots of guys in the 80’s to wear them.

I am not sure if they are Bass Weejuns? They look like they are Bass Weejun Larkins, as they are quite narrow and the lip is rounded . Other makes traditionally are a wider foot.To be fair the wardrobe department may have just got some smart shoes from a local shop. These days Loake have Georgetown which looks very similar. The Bass Weejun in the UK is getting harder to get, stock seems to be very limited in any shops.

At the time I loved this film so much, for many reasons that lots of us loved it for. As I have got older I would draw different bits from it. In my scooter days i would happily watch just the scooters. I have only seen the film once on the big screen, in the 90’s, when I was going through my raving days, then I loved the dancing all night etc sequences.

Now I look at the film differently again. In my 40’s I can see lots of the fashions are a very late 70’s take on the 60′s, but the overriding feeling to me now is what a great film about youth and all that it entails, take away the clothes (and perhaps the scooters) and it becomes timeless.

From a shoe perspective not as much to say as I thought there would be. But I really did enjoy taking the time out to watch the film again. If you have the time over Christmas try to watch the film, as i think you will get more from it than you might think at the moment. And I hope you find some little gems just like I did.

Have a good Christmas and Happy New Year
Andy @ Modshoes

2 thoughts on “Quadrophenia – The Shoes”